Saying I am excited is an understatement for the tinkering that has produced the previously described TRU Writer site. I spent time on a Friday night just fiddling with functionality no one will ever notice.

In summary, the notion of the SPLOTs I am working on here at TRU with Brian Lamb is… well here is a draft of a session we will do in February for a local event:

All too often, educators wanting to use online environments are given two stark choices. They might stay within the well constructed but limited capabilities of a learning management system. Or they might try to utilize the power and freedom of the open web. To the newcomer, open web tools can seem frightening in their multi-faceted approaches and in the perceived risks to user privacy. Enter SPLOT: Simplest Possible Learning Online Tools. SPLOTs are developed with two key principles in mind: 1) to make sharing content creation on the web as simple as possible, and 2) to let users do so without having to create accounts or divulge any personal data whatsoever. Brian and Alan will share prototype SPLOTs, let you try them out, and engage a discussion with participants on how these tools might support engaging and relatively painless online and blended learning.

The idea of the TRU Writer is a simple way for faculty, researchers, students to publish web content in a rich, media form without having them create accounts. Rather than try and explain, take a ride on the random example spinner (Randomness is something I nearly always try to toss into the mix).

One thing that came up when discussing the idea–before coding the site– with Will Garrett-Petts (Associate Vice-President Research & Graduate Studies) was he did not see people interesting in composing in a WordPress interface. Most academics, and what he was used to, was writing in MS Word. At the time, I was sure that paste contrent into MS Word was an HTML disaster… until I did some research and found that the TinyMCE editor in WordPress 3.9 was capabable of stripping out 95% of the cruft Word puts into HTML.

Brian gave it his test last weekend and cut/pasted in from a Word document the full formatted content from the Reclaim Innovation EDUCAUSE article he and Jim Groom published this year. See how it renders in TRU Writer. There is some white space cleanup, and maybe some header conversion that can be done, but most of the effort is done. And, in TRU Writer, you can add extra images, and embed media (this is by no means as rich as the version created by EDUCAUSE, but was done in less than 5 minutes).

The funny, unintentional thing is, that because this is WordPress, it sent an old fashioned trackback ping to Bryan Alexander’s blog, and Bryan tweeted it right away:

@jimgroom and @brlamb urge educators to reclaim innovation and the open Web: http://t.co/7hMzGF2k4Z

Internet, you so ironic.

Now is the time where I can ask people to try the site out at http://splot.ca/writer. There are design gaps in the interface, and the help screens are a joke.

That little bit was fun- figuring out how to create a lightbox screen rather than sending a user elsewhere, a h/t to tutsplus. Now that I have done it once, I can use this again.

I’ll relay below some of the new things I’ve done in a week; the theme is hanging on github but still needs some wax and polish and torque screwdrivers. The TRU Writer theme is developed as a child theme of a beautiful, free Radcliffe theme I found in the WordPress collection. It’s definitely medium-like. Did I say “free”?

The magic sauce here is to give access to some features you only get by logging in to WordPress as an Author role, like the Comparator tool, I invisibly, secretly… log you in to WordPress as an author role. This is done by an invisible login script to an account, removing the admin toolbar and access to the dashboard, and adding (new here) an automatic logout after 2 hours.

I’ve made this even more elegant (I think). The page template that generates the writing tool, first checks for an active login (meaning are you logged in either as a secret author or as an editor/admin)?

If not, you get sent to the “desk” page- it actually takes care of the other case, if you are already logged in and for some reason go to this page, you get redirected to the writer tool

Otherwise, you have to enter an access code, a really low security fence as a means to grant access on a per site basis 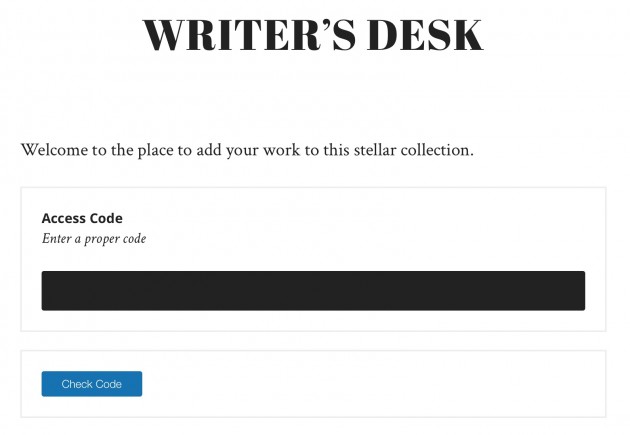 There is even a hint that pops up if you get it wrong (BTW, the super secret access code for this demo site is tru writer).

and that gets you back to the writing form previously described. On the form you enter a title, however you wish to be attributed as author, an option to upload a header image, categories, tags, and then the WordPress visual editor. What I added recently is a chance to add a note that only the editor will see

For my test, I used a Word document of the final formatted version for the Web 2.0 Storytelling EDUCAUSE Review article I wrote way back when with Bryan Alexander.

There was something I wanted to test- while the WordPress editor does a great cleaning job with content from MS Word, you lose the embedding images. They can be added to the TRU Writer using the same media uploader you use in WordPress 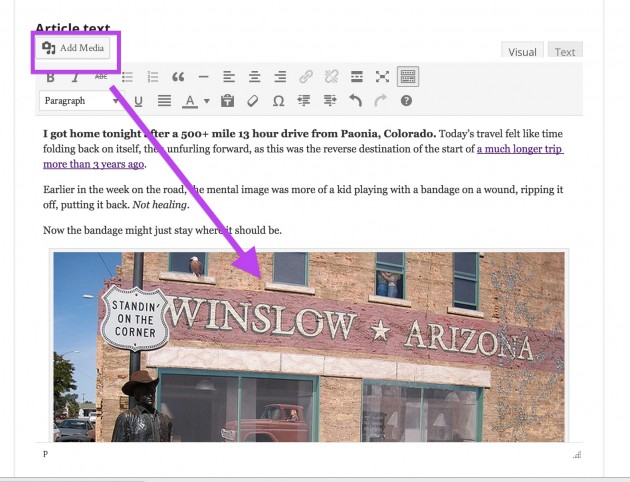 But getting images out of Word can be a butt pain. Well, until I googled and found an awesome tip from Clement Nedelcu’s Development Journal. If you make a copy of a *.docx file, and change the file extension to *.zip you can then open the compressed file and find all the embedded images.

Bingo! They end up inside the word -> media folder! 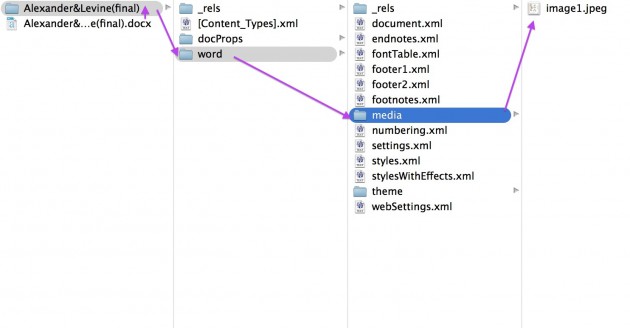 This took but a few minutes to load into the TRU Writer, where I removed extra white space, added some images, and boom! It’s online http://splot.ca/writer/2014/101

An extra bonus you get from doing this (secretly) in WordPress, is you can embed media with a single URL. See the example of Lincoln’s speech to the People of Sangamon County.

The bits I have been working on including making the editing form wider so you have more space to work in the educator (that is removing the class name from a single div), but mostly setting it up so the sitre can be configured for other deployments. This meant creating an admin options screen:

For any site you can customize the access code and a hint given to failed attempts (like “the course name” or “school mascot”). And you define the default header image used if the writer does not provide one.

The next section allows you to enter email address for editors; these are people you would set up to proof and publish submitted works (email notification not quite working, need to deal with getting it by phish detectors). There are also a few status messages that check for the activation of the plugin that provides the estimated reading time, and also that the secret author account has been set up.

We see this a publishing platform, so I removed the comments part, though now that I think about it, I can just make that another admin option (This is a prime example of how I never anticipate all the design elements ahead of time, its an iterative process for me as I work on projects).

I’m not sure either. I can see setting up sites for just a course, or maybe as a single online journal. The front index page could be recast as a formal intro by making the front of the site a static page. I am counting on other people to figure out some more use cases (as I google “cibra from ashes”) — was that supposed to be cobra?

You tell me. Try some quick publishing at http://splot.ca/writer/.