It’s been one of my long term dream plans to make a generalizable WordPress theme approach to the ds106 Daily Create so people (me included) could create news site to run daily challenges.

One of the things I wanted to do differently was to make the way people contribute is via twitter, going back to the way the old Daily Shoot used to work. My plan was to work in the twitter API, so that it would look into the mentions timeline of the account you wanted to us (so you only get replies or tweets to a specific account). I also wanted it to use a specific hashtag, so the site would know which Daily _____ it responded too. And last, I wanted an item to have a link to the response in the tweet.

Well… I actually got it all working in the demo site and set it up for a version to run for the You Show.

And I got most of the technical shenanigans into a long winded technology teeming post. One thing I was worried about (maybe not likely a problem) was a way to progressively load new responses– it would be too much overhead to list them all since I am using an embed function on each tweet.

I thus experimented with the Ajax Load More plugin, and got that sort of working, where it could append the next 10 set of responses (its tricky since these are stored as custom post types) (but I got it)

I think I got the event timer to work, but also added an admin feature to force an update.

I think its a lot to ask people to get the three needed items in a tweet (@trushow15, #YSdailyXX tag, and a URL).

And worse, I keep coming across ones I see in twitter that look like they have all three and are not showing up.

While I could dig and pick at the latter problem, the first problem is more of a problem.

And thus I realized I think I am doing it wrong.

So I went back to the way I set up the Writing responses to the DS106 Daily Create (example). I think it will be easier if people respond just by filling out a form on each entry. Like: 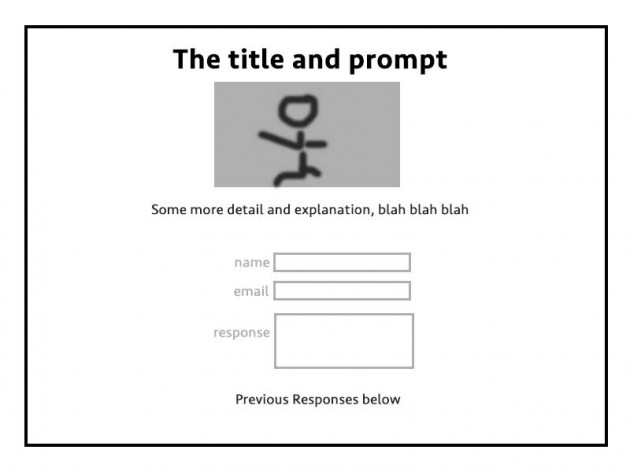 What a minute- that submission form looks familiar.

So if I use the comment form (which I can do some tweaking to change the labels), it takes care of the displaying of the responses. I might be able to ad some code to auto embed any IMG URLs.

Now the site gets easy. I will still have the back end magic that creates unique tags, and schedules the post from the admin interface (I’m pretty proud of this):

This panel appears in the post editor, and when the entry is saved as draft, it does a bunch of things to each post (1) adds the next available tag (which might not be necessary, but is useful for naming the post urls); (2) Sets the post to be scheduled 24 hours after the last one in the queue; (3) adds some meta data to each most

Plus now I can use maybe a more elegant looking theme.

I think I can re-rig this in a few days, ultimately it should be a lot simpler for other sites to use. Heck it might be now something that can work as a child for any theme? I will leave the original code on github because knowing how to get stuff from the twitter API as a useful thing to figure out.

I’m doing it wrong more often than not. It just helps to know.