This bit of metal sculpture sits atop a bicycle shelter on the TRU campus. I’ve noticed it numerous times since I arrived here three months ago. It has a stylish shape.

On this clear vivid sky day, in mid afternoon, the light was super contrasty strong. I thought that I might be able to isolate the shape against the solid blue sky, but was not sure I could get an angle with buildings and trees near by. But getting closer to the shelter, and lifting the camera up I got a near pefect angle.

I might have done well to brush out the two small white blemishes in the metal, but I might be the only one to see those marks.

There actually was a little bit of tree detail in the upper left that I clone brushed out in Aperture, and I cropped it a tad to center it up. It was not until I was editing that I saw the reflection of the bicycle shape on the roof of the building. And that made the photo even better.

While fully centered and breaking the rule of thirds, it works (to me) as a composition. I knew I liked it a lot as soon as I saw it in my photo editor, and was easily my pick for my daily photo.

But it was a really nice bonus that the photo on flickr was selected to be In Explored the supreme show case of photos that editors put the best photos they see shared on flick. 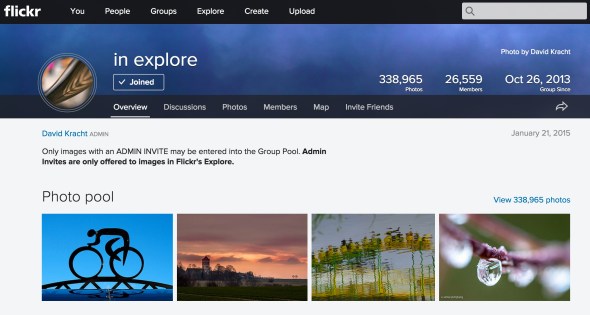 This makes the fifteenth photo I’ve had picked for Explore; and tonight I found a Scout Tool from BugHugLabs (it works through the flickr API) that not only lets you see which of your photos had been picked for Explored, but also lets you generate a poster:

I don’t play the games that people do to get explored, it’s not a goal for me but it does feel pretty darn good when it comes out of the blue considering the quality of other photos in that pool.

If you ever need some inspiration, just take a few scrolls through the photos that are added to In Explore every day.

The best reward is taking photos that you feel proud of and enjoy yourself.

Everything else is tertiary. Or less.