That thing about sensing good light also applies to links. And the people who are linking them. Sometimes, you just get a good intuition.

Wiki ShootMe looks like a fun way to add to Wikimedia Commons https://t.co/3N5RRB6vc8 #ccourses via @sjgknight

Besides the usual attributes, one thing the Wikimedia empire does well is using it’s vast data to tell you what it lacks. How many information systems do that? This is the idea behind Wikishoot: 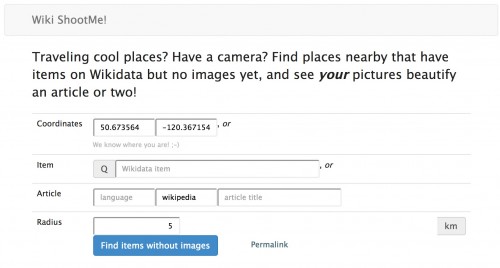 It’s meant to assist in adding to Wikidata

a project of the Wikimedia Foundation: a free, collaborative, multilingual, secondary database, collecting structured data to provide support for Wikipedia, Wikimedia Commons, the other Wikimedia projects, and well beyond that.

So it’s a giant database that sites like Wikipedia et al can use to be fed accurate information, rather than have it hand edited in articles.

Of course, because we are in the WikiEmpire, we get muddled explanations like

One of the fields of entry is an image associated with a piece fo data. I could not grok the way Wikidata works from its explanation, so I looked at a full example linked from the front page, the one for Mt Everest. There you find data on alternative names (synonyms), names in other languages (translations), map data (geolocation), etc. And a place to link images.

So if one was building any kind of resource related to Mt Everest, using of course a “Lua Scribunto interface” (more likely an API), just knowing this node as a “pivot” for Mt Everest we can retrieve all kinds of data that describes or locates or shows Mt Everest.

What Wiki Shootme! does is connect entries in Wikidata that lack an image, and associate it with a location — when you go to the site, it tries a browser geolocation to find where you are in the world (or you can edit latitude / longitude to pick another location), and then it finds nearby Wikidata entities that lack images.

“Traveling cool places? Have a camera? Find places nearby that have items on Wikidata but no images yet, and see your pictures beautify an article or two!”

It’s a data matchmaker! It found at my present location, the campus of Thompson Rivers University, a bunch of places needing images. 27 of them 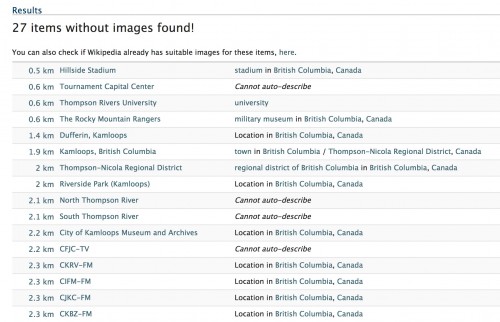 The closest (now) is Hillside Stadium. There are all kinds of things listed, including seating capacity (1050) and the team that uses it or occupant.

And thus you get this

What can go in the field? My guess is a URL, but that’s wrong. This is the help displayed from the question mark button:

After specifying a property you can enter a corresponding value. If the property has no designated value or the actual value is not known, you may choose an alternative to specifying a custom value by clicking the icon next to the value input box.

Yeah. I am helped.

So I returned to the entry for Mt Everest. You can usually learn by copying an example, right?

Actually the Wikidata entry I worked on, the building for radio station CFBX, is not listed in Wiki Shootme…. because I added an image to it!

This morning, it was the closest to my location, in fact it is the building next to me office in House 9. I just went over there, and snapped a photo with my iPhone, and uploaded it to Mediawiki Commons 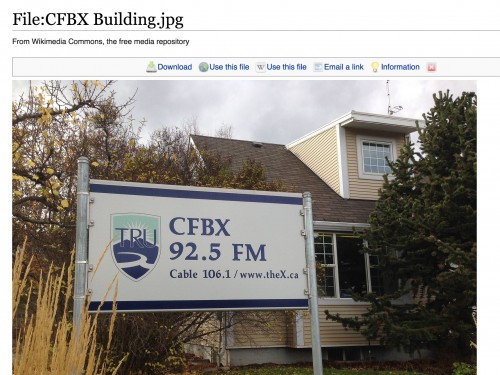 And for fun, even added my image to the CFBX-FM Wikipedia article. What’s cool, because all of this data is linked, is that without me doing any editing, the media page for my photo now lists these two as “File uses on other wikis” 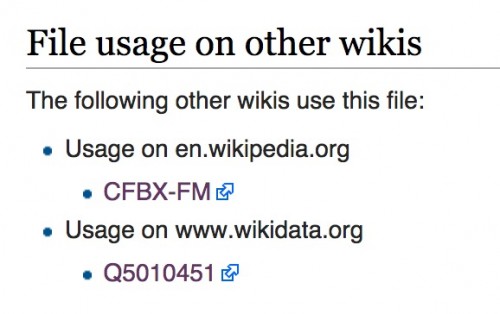 So this is interesting to me for the way all of this data can work together. I have played a bit with another Wikimedia Tools Lab one (flickr2commons) that allows you to add images to Wikimedia Commons directly from flickr, and all of the data travels with it (license, credit, the image). That is slick.

This also is a low barrier (once you figure out this convoulted editing path) to contribute to Wikimedia without diving into article editing.

And that, friends and fans of Mike Caulfied, is the real crux… this whole Byzantine masterpiece really does not become a way of thinking unless you are doing it day in and day out. The usual gripe is that people don’t generally write much in Mediawikis because of the authoring interface.

But in general the whole conceptual structure of things os pretty obtuse… until you muscle through one. But even that does not matter until you do it on a regular basis.

So I’m going to focus some more energy on adding photos to Wikimedia Commons.

4 thoughts on “Wikishoot (and that *thing* about wikis)”