File this one as another Alan Falls Down A Slender Thread of Web Connections and Wants To Scream “ISNT’T THIS AMAZING?”

In all the ways the web has become, for those under 25, something that has always been there, and hence not a technology’ it’s not viral big trending stuff or the oft tweeted videos that I enjoy the most. It’s the small little bits that few likely every see.

I walk the web regularly, as my favorite form of exercise.

While visiting Nancy White in Seattle, this morning I took a walk for coffee and just looking around the Ravenna area, 65th Street is one of the arteries with all shop fronts. While aiming for a stop at Oasis Bagel (recommend), I happened to look up, and marvel at this small bit of architectural detail you do not see as a style on modern stucco structures:

The mosaic style caught my eye, as did somewhat of a throwback to pixelated text, but I also wondered “Who is W.F. Schumacher”? How much could I find out? The doorway below this was closed, and had a plater with names and buzzers, now its a multi-unit residence.

But what was it before?

Googling on W.F. Schumacher got a mess of things, and adding Seattle narrowed me to a newspaper advertisement in the September 15, 1947 Jewish transcript newspaper 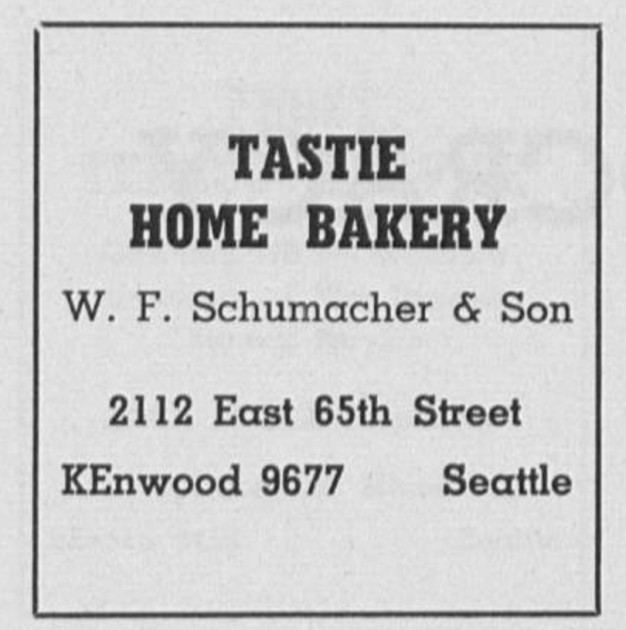 Why are there digitized copies of ads from newspapers almost 70 years old? That are seemingly indexed for search results? I have no idea, but it makes me giddy.

So now I think W.F. ran a bakery. There’s the address, pop that into Google Maps… and I am right where I was this morning. Here’s the map, and you can see the sign archway in the Streetview image, right between Zeek’s Pizza and Oasis Bagel

That was about 3 minutes of effort.

Now that I know the name of the bakery, that gives me more to look for, so I google on Tastie Home Bakery Seattle, and first hit is a flickr image, a historical photo of 65th Street from 1955.

In the comments you find more memory bits from people who grew up in this neighborhood.

This is a creative commons licensed historical photo from the Seattle Municipal Archives. Would the internet designed by commercial interests have provided this platform? (cough). There is even a link to the full data record in the archives, where there are more gold flakes:

Who was Ira Miller? If I went down that web thread, who would know where I’d end up?

But I can compare that to a view now from Google Streetview; this appears to be just east of 65th Street and Revenna, looking down to the right (past the traffic light at Ravenna) would be W.F. Schumacher and Sons bakery 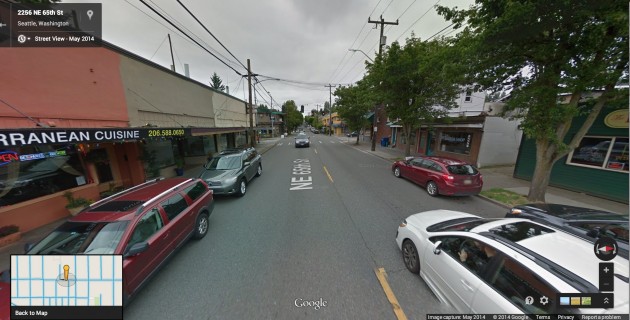 I even played a bit with my Comparator Tool to make a before / after widget for these photos (Not quite registered correctly, that’s much harder than it looks!).

And I then found the obituary for “Baker Bill” Schumacher, who died in June 1999: 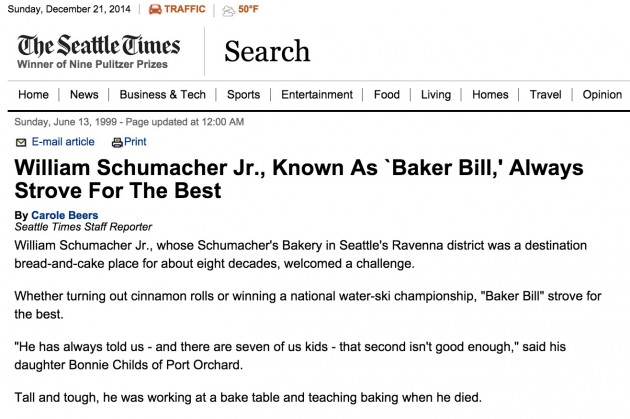 Schumacher’s Bakery was there for decades, and he was baking until the end.

Tall and tough, he was working at a bake table and teaching baking when he died.

Mr. Schumacher, who was 86, suffered a stroke Wednesday (June 9) at the Maltby Cafe northeast of Woodinville. He had worked at the cafe since 1994. Financial problems forced the sale of his namesake shop.

“He was a master baker,” said cafe co-owner Tana Baumler. “He had specialties, like lemon angel-food cake and raisin bread.

“He was baking French rolls when he fell. Someone caught him. He couldn’t talk. . . . After we finally got him (in a chair), I realized he was pointing to the oven. He wanted us to take out the French rolls.”

Baker Bill was not all about baking the dough, he was an avid water skier:

In the 1940s, he and friends started a water-skiing club on Lake Washington. They wore black tennis shoes nailed to cedar slats.

The accomplished baker became an accomplished water-skiing racer and hot-dogger. He could carry two people on his shoulders. His group even gave demonstrations.

He once water-skied from Seattle to Anacortes. He also had been towed by a seaplane and by the Slo-Mo-Shun IV hydroplane. He won a national championship in the 1950s.

He last water-skied at age 85.

He made his living at baking but saw returns drop as the cost of sugar skyrocketed. He didn’t have the heart to raise prices dramatically.

What a ride I enjoyed skittering across the web, just from the start of a name on a building.

How many portals of history and information do you zoom past every day?