I’m planning on skipping the philosophical life’s been good to me so far year end posts, but cannot pass up on my most regular activity since 2008- my daily photo (almost every day) post to flickr. You can get the back story in previous posts, but more or less, after seeing D’Arcy Norman do it in 2007, I started in 2008… and have not stopped.

Is this a community? There’s actually not much discussion on the group forums. But people keep posting photos there. Considering we thought it was a fluke, the URL is stick with the idea that 2008 was a leap year. Sometime tomorrow, I will update the group name and maybe host a new banner image, but it pretty much just goes and goes and goes.

In grabbing the screen shot of my annual collection I noticed the number of photos each year is rarely exactly a photo a day. There are no prizes for perfection and no demerits for being short of perfection. I was pretty focussed on doing it every day in 2014, and can guess I missed 2 in some international travel. Or they are in there and I just forgot to add them to my set. 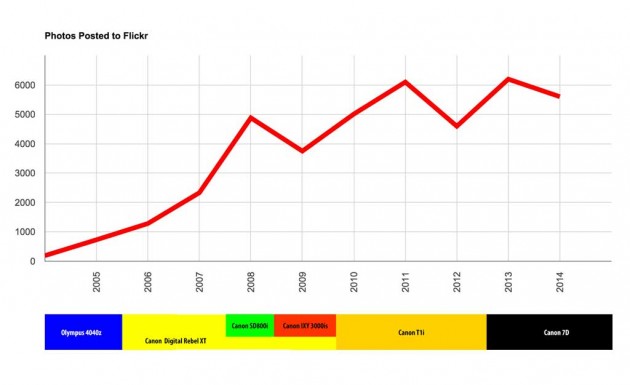 But then I got carried away by trying to do a history of my cameras. There used to be a search string where you could find all of your photos taken with a particular camera model but flickr search giveth and it taketh away. Luckily I did have a 2009 blog post history of my cameras up til then, so I pieced it together as the color bars at the bottom.

I’ve had a DSLR since 2005, but there was quite a long stretch where I mainly used 2 compact Canon cameras (it’s been a long string of Canons). The Digital Rebel went on eBay, I sold the T1i to a friend. I still have the compact 800SDi but regret losing the IXY3000IS in a hotel room in Colorado. I think. And I forgot that in June 2013 I bought a compact Olympus TG-2 for a Grand Canyon hike (I remain too angry about that cameras stupid proprietary USB cable, missing now, to include it. Take that).

I could try an find some theme or summary of my daily photos for 2014, many are likely photos of flowers or beer or landscapes, but it’s all there. Plus friends. And food. And squirrels. And bicycles. And… well it was 2014.

You want to get on board? Join up at https://www.flickr.com/groups/366photos/ or do it any way that works for you.